Lift to Rise “We Will Lift: Stories Of Home”

Galilee Center was honored to have been featured in the Lift to Rise social media series called “We Will Lift: Stories of Home”. The series features residents and community partners who share in their mission of seeing all Coachella Valley residents stable, healthy and thriving in the spirit of We Will Lift: Regional Pledge for Housing and Opportunity.

Galilee Center began providing community aid more than a decade ago “under the shade of a tree,” Claudia Castorena says. The immediate goal was to provide direct assistance to those who needed it most, whether it was food or diapers or clothing.

“I knew I had to be of service, because LOVE was the call,” she said. 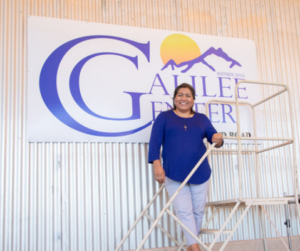 Claudia and co-founder Gloria Gomez formed Galilee after working for about two decades helping Coachella Valley unsheltered residents at Martha’s Village and Kitchen. Now in its 11th year, Galilee offers a range of services including about 725,600 meals annually for disadvantaged children, families and farmworkers in the eastern Coachella Valley.

They also operate a vital community resource: a temporary shelter in the unincorporated community of Mecca for farmworkers who come seasonally to the valley. Galilee also offers shelter to families seeking asylum. The majority of these families head elsewhere in the United States, but Galilee is a safe and peaceful stop along the way.

“They can have hot meals and snacks and a nice warm clean and healthy place to sleep,” Claudia says.

Decades of this work has taught Claudia that affordable housing is a key piece to eliminating poverty. Whether it’s residents dealing with addiction issues or single parents trying to give their kids stability, a home for those who are most in need allows them to access to other resources.

“It has to be affordable for the low-income and very low-income communities,” she said. “Affordable and secure housing makes it is so much easier to succeed. Having a house, or being able to maintain and keep housing affordable, means a person can still secure that employment or have their kids go to school, have stability.”

Lift to Rise is a collective impact organization that works to achieve a future where all Coachella Valley families are healthy, stable and thriving. Learn more at www.lifttorise.org