OASIS — A health clinic on wheels is the latest health initiative to roll into the east valley to address the massive lack of care in rural communities heavily populated by farmworkers.

The 40-foot Riverside County Mobile Clinic has promised to visit the San Felipe Community and Housing Center in Oasis on the second Thursday of every month.A medical director, pharmacist and nurses staff the truck, providing general exams, preventive screenings, immunizations, physical exams and vaccinations for anyone — insured or uninsured.

“It’s for all the community people that live in the area,” said Alex Wu, a clinical pharmacist who works with the program. “We don’t care who comes by, as long as they come by. We are just here to help.”

“It’s free. I don’t have insurance. What if I get sick?” Hernandez said in Spanish.

According to the most recent statistics from the Palm Desert-based Health Assessment Resource Center, 17 percent of, or almost 59,100, residents in the Coachella Valley reported not having any kind of health care coverage in 2010. That’s up from 15.2 percent in 2007.

And even if someone does have insurance, there’s a deficiency of doctors in the east valley, adding to the health care challenge.

Over the years, other health initiatives also have stepped up to put a dent in the daunting problem.

In late 2010, the Coachella Valley Volunteers in Medicine opened its no-cost clinic in Indio to provide heath care to the uninsured and underinsured. 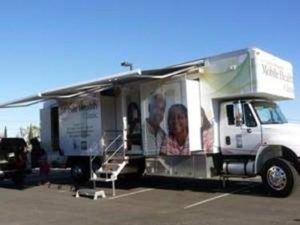 The Riverside County Mobile Health Clinic provides services to the uninsured outside the San Felipe Community and Housing Center in Oasis the second Thursday of each month. Xochitl Peña/The Desert Sun

The 40-foot clinic on wheels, operated by the Riverside County Regional Medical Center, stops at the San Felipe Community and Housing Center at 67-305 Harrison St. (Old Highway 86) in Oasis from 9a.m. to 1 p.m. on the second Thursday of the month.
For more information, call (951) 486-7555 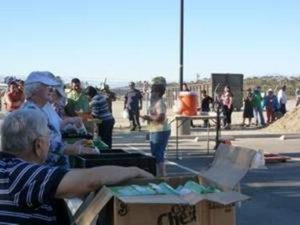 People wait in line to receive food and clothes donated by the Galilee Center outside the San Felipe Community Center in Oasis. Many then take advantage of the Riverside County Mobile Health Clinic either before or after picking up their goods. Xochitl Peña/The Desert Sun

Los Médicos Voladores, or “the flying doctors,” visits Thermal twice a year to provide medical, dental and eye clinics. Thousands line up for the help.

The next visit, to Desert Mirage High School, is scheduled for March 31

Eileen Packer, chief executive officer of Health Assessment Resource Center, said it says a lot about a community if the flying doctors have to come in to provide services.

The Coachella Valley is their only United States stop. The rest are in Third World countries.

Packer said her organization hopes to raise enough money to do a health assessment on the east valley to identify what the unmet needs are so programs and services can be developed.

“Their community definitely is a poor community, and we know they have their health challenges,” she said.

The mobile clinic has cruised through Riverside County to make stops for a couple of years. However, the stop now in Oasis is its first venture into the Coachella Valley.

A second stop, at an east valley school, could happen soon, Wu said.

One of the reasons the San Felipe Community and Housing Center in Oasis was chosen was because of the hundreds of people — mostly farmworkers — who gather there each Thursday.

That’s where the Coachella- based Galilee Center sets up its distribution site for food and clothes.

“It’s a great opportunity for another agency to come and gather information … and help,” said Claudia Castorena, co-founder of Galilee Center.

About 250 people show up each Thursday for food and clothes.

The mobile clinic has made only five visits to the farm labor camp center so far, and averages about 15 patients a day. The other more established stops see around 40 people.

Wu expects the numbers to increase in time.

“It takes time for us to build trust and relationships with the community,” he said.